What makes the thyroid gland 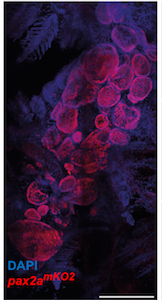 The thyroid gland regulates growth and metabolism via production of thyroid hormone in follicles composed of thyrocytes. So far, thyrocytes have been assumed to be a homogenous population. To uncover genetic heterogeneity in the thyrocyte population, and molecularly characterize the non-thyrocyte cells surrounding the follicle, we developed a single-cell transcriptome atlas of the zebrafish thyroid gland. The 6249-cell atlas includes profiles of thyrocytes, blood vessels, lymphatic vessels, immune cells including macrophages and fibroblasts.

The Thyroid Gland Atlas can be explored using an online webtool.

The Atlas was generated in collaboration with Dr. Sabine Costagliola Lab at IRIBHM, ULB, Brussels.